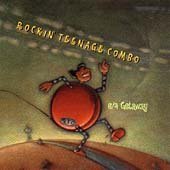 SakiaMusic is run by Seattle based producer, composer, keyboardist Dara Quinn. The label entity was originally created to self release titles by the Rockin' Teenage Combo, however, Sakia [divine intoxication] is destined to release more original funk, hip-hop and jazz from the Northwest.

"span"Dara Quinn hails from the beautiful Tri-Cities, Washington. "Growing up 20 miles downstream from the nuclear reactor hasn't effected me at all" says the radiant keyboard player. Playing piano since the age of 6 and studying clarinet, oboe, trumpet, steel drums and percussion during her life have lead her to be a pianist in high demand. Her percussive tendencies are original and dynamic with influences from Afro-Cuban to jazz to funk and beyond.

PK is Dara's partner in crime. Paul Kemmish, a Seattle native has been playing locally since high school. His electric bass skills were molded by some of the funkiest bassists in the Northwest, his ability to groove has been a solid bonus to his tasteful bass playing. Upright bass came into the picture later, often one may find PK slapping the wood on the upright just like a Tuesday night date.

"span"Oliver Klomp plays on RTC's first two albums and part of the third . "Olli" as he is called is a dynamic Seattlelite with a rock history. Popular bands such as Gruntruck and Tantra-Tantrum have utitilized this Cobhamesque drummer. Odd time signatures and glorious solos are his specialty.

Dave Hill who also plays drumkit on RTC's live album hails from the Northwest as well. Known from the popular band Inflatable Soule, Dave has played in many contexts, jazz, West-Indian, rock and others with some of the best musicians around the Seattle area. DH has also shared the stage with greats such as Michael Shreve and Trilok Gurtu at drumming exhibitions. WARNING LADIES: Watch out for the smile.

Staying off the sidelines