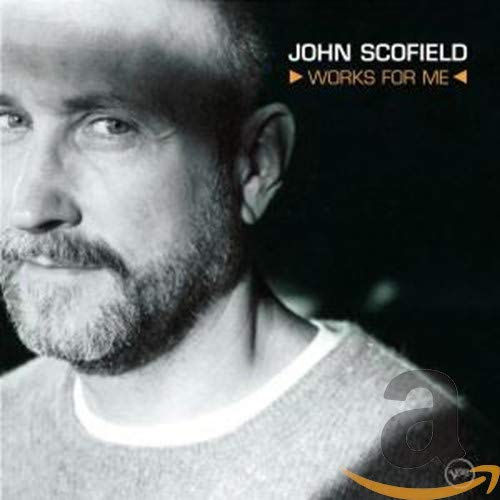 In his CD Works For Me, guitarist John Scofield returns to the jazz heartland, focusing on straight-ahead, four-to-the-bar swing in the company of Kenny Garrett, Brad Mehldau, Christian McBride and Billy Higgins--all masters of their respective trades. Scofield, one of the most distinctive and influential jazz guitarists since John McLaughlin, has always had a penchant for word-play titles (most of them in fact devised by his wife) and "Works For Me" is very probably a coded reference to the fact that in this album he favours the music closest to his heart. It's not all heads-down bebop though: there are chastened ballads and episodes of the funk vamping which has become Scofield's latterday signature; however, on this occasion even potentially banal riffing is spiced with harmonic surprise and enlivened by Sco's distinguished rhythm section. Scofield the instrumentalist also seems to enjoy a renascence, stepping up to creative levels he hasn't always reached in recent years. Such early triumphs as Rough House, Who's Who and Still Warm are run close, if not entirely recaptured. --Mark Gilbert

During his illustrious career, John Scofield has cleverly kept abreast of trends, lending his serpentine blues-'n'-jazz riffs to volcanic fusion blowouts, grits and gravy funk, even whisper-soft big-band projects. His chameleon approach has shone on such albums as Bump, his seminal fusion recordings Still Warm and Blue Matter, and his bop band workouts with Joe Lovano and Bill Stewart.

At his core, Sco is a jazz master, and we long to hear him interact with other giants of the genre. Works for Me answers this expectation generously. What's so compelling about hearing Sco with Billy Higgins, Kenny Garrett, Brad Mehldau, and Christian McBride is the accumulation of the fiery solos each man plays and the mood of each collective note. Higgins is the balloon the band rides here, and Mehldau has never sounded better. Garrett's dense logic is the perfect foil for Sco's charred leads; the intimately crafted songs find each man going deep with each improv. The band's overall crystalline perfection is so relaxing that it's almost mystical. And for all that, they trade fours and eights, a rarity in the pressured world of studio recording. This is an exceptional album that tells its tales with great depth, detail, color, humor, and passion. --Ken Micallef